And all that jazz

There’s never been a better time to experience Chicago, the very definition of a Broadway smash. The recipient of six Tony Awards, a Grammy, and thousands of standing ovations, Chicago is now the #1 longest-running American musical in Broadway history.

This sharp-edged satire remains a hit because it delivers all the razzle dazzle of Bob Fosse’s legendary choreography, a story of fortune and fame, and signature songs like “All That Jazz.” Time Magazine calls it “A Triumph.” Newsweek raves “Smashing,” and Entertainment Weekly calls Chicago “Broadway’s most electrifying show.” Whether you’re a Broadway newbie or someone who’s been around the cell block, Chicago always delivers.

Come on, babe! Head to Chicago. It would be criminal to miss it.

WHAT TO EXPECT
Sequined glitz and ferocious kicks

Subscribe & save! Tickets start at $39 with a subscription of three or more shows. Save big with a Broadway in Anchorage subscription and see all three Broadway shows for one low price. Tickets for just this show start at $49.75.

Online subscriptions for this show are now closed. Call Anchorage Concert Association for options to include this show in a subscription of three or more shows: 907-272-1471.

Be part of the action with special VIP table seats right in front of the stage.

Audience members seated here will be visible to the entire audience. No late seating or re-entry during the show. Recommended for ages 21 years and older.

Each ticket also includes a bottle of sparkling water at your table, a Chicago poster signed by the cast, and admission for one person to the Alaska Center for the Performing Arts’ Carr Family Patron Lounge (for date/time of ticket purchased only). For more details about the PAC’s Patron Lounge, visit alaskapac.org/patronlounge

To upgrade your current tickets to table seats,, contact the CenterTix box office at (907) 263-2787 or complete a ticket exchange form.

The Chicago VIP Table Seats are currently sold out for several performances. More seats may open up. Follow the Facebook event for updates. What to do when a show or section is sold out. 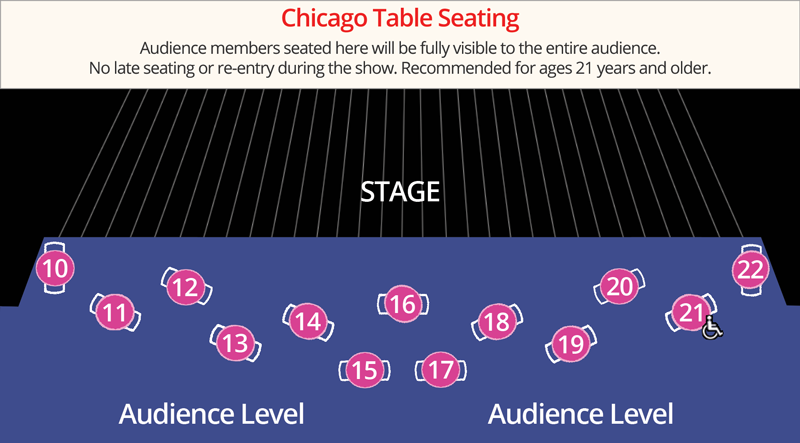 All performances at the Atwood Concert Hall in the Alaska Center for the Performing Arts. Runs approximately 2.5 hours including intermission.

CABARET FOR A CAUSE
Join the cast of Chicago the Musical in a special cabaret performance, benefiting Alaskan AIDS Assistance Association (Four A's) and Anchorage Concert Association’s presentation of It Gets Better. Learn more.

BROADWAY IN ANCHORAGE LOTTERY
A limited number of tickets will be available each performance at a pre-show lottery for $25 apiece. Learn more.