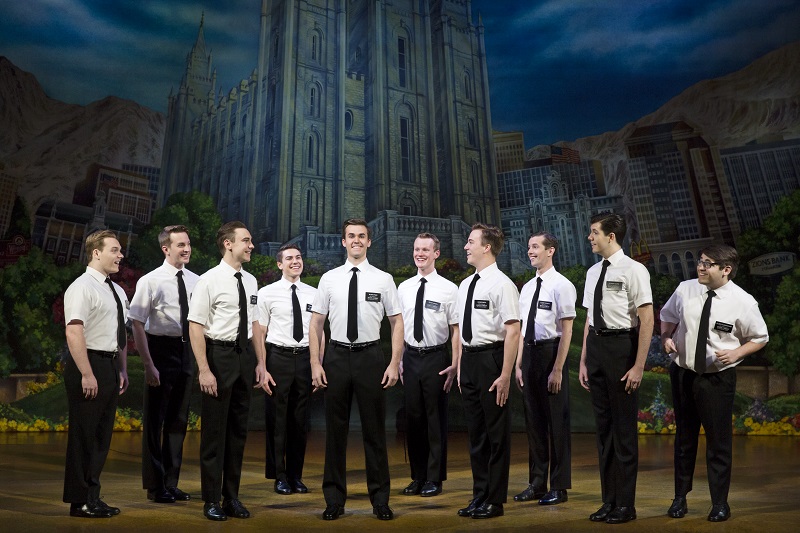 “THE BEST MUSICAL OF THIS CENTURY. Heaven on Broadway! A celebration of the privilege of living inside that improbable paradise called a musical comedy.”
-Ben Brantley, THE NEW YORK TIMES

ANCHORAGE, AK – THE BOOK OF MORMON, winner of nine Tony Awards including Best Musical, is pleased to announce a lottery ticket policy for the National Tour, which begins Oct. 19 at Atwood Concert Hall, presented by Anchorage Concert Association, and plays a limited two-week engagement through Oct. 28. In Anchorage, the production will conduct a pre-show lottery at the CenterTix box office, making a limited number of tickets available at $25 apiece.

The wildly popular lottery for the Broadway production has attracted as many as 800 entries at some performances. The producers of THE BOOK OF MORMON are pleased to offer low-priced lottery seats for every city on the National Tour.

Entries will be accepted at the box office in the Atwood Concert Hall lobby at the Alaska Center for the Performing Arts beginning two and a half hours prior to each performance; each person will print their name and the number of tickets (1 or 2) they wish to purchase on a card that is provided. Two hours before curtain, names will be drawn at random for a limited number of tickets priced at $25 each for cash payments. Only one entry is allowed per person. Entries are checked for duplication prior to drawing. Winners must be present at the time of the drawing and show valid ID to purchase tickets. Credit card payments subject to box office fees. Limit one entry per person and two tickets per winner. Tickets are subject to availability.

THE BOOK OF MORMON features book, music and lyrics by Trey Parker, Robert Lopez and Matt Stone. Parker and Stone are the four-time Emmy Award-winning creators of the landmark animated series, “South Park.” Tony Award-winner Lopez is co-creator of the long-running hit musical comedy, Avenue Q. The musical is choreographed by Tony Award-winner Casey Nicholaw (Monty Python’s Spamalot, The Drowsy Chaperone) and is directed by Nicholaw and Parker.

The Original Broadway Cast Recording for THE BOOK OF MORMON, winner of the 2011 Grammy Award for Best Musical Theater Album, is available on Ghostlight Records.

Tickets for THE BOOK OF MORMON are available at CenterTix box office and anchorageconcerts.org.