Tickets on sale to the public Thursday, July 12 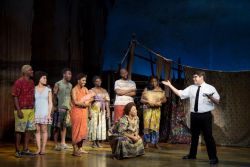 “THE BEST MUSICAL OF THIS CENTURY. Heaven on Broadway! A celebration of the privilege of living inside that improbable paradise called a musical comedy.” – Ben Brantley, THE NEW YORK TIMES

Anchorage, AK – The producers of the national tour of THE BOOK OF MORMON, winner of nine Tony Awards® including Best Musical, and Anchorage Concert Association announced today that single tickets will go on sale Thursday, July 12, at 10 a.m. Tickets will be available at the CenterTix box office, 621 W. 6th Ave., by visiting anchorageconcerts.org, or by calling 907-263-2787 (263-ARTS). Group orders of 10 or more may be placed by calling 907-263-2787. Tickets are also available as part of an Anchorage Concert Association subscription.

THE BOOK OF MORMON features book, music and lyrics by Trey Parker, Robert Lopez and Matt Stone. Tony Award-winner Lopez is co-creator of the long-running hit musical comedy, Avenue Q. The musical is choreographed by Tony Award-winner Casey Nicholaw (Monty Python’s Spamalot, The Drowsy Chaperone) and is directed by Nicholaw and Parker.

The Original Broadway Cast Recording for THE BOOK OF MORMON, winner of the 2011 Grammy Award for Best Musical Theater Album, is available on Ghostlight Records.

THE BOOK OF MORMON plays a limited two-week engagement October 19-28 in the Atwood Concert Hall, presented by the Anchorage Concert Association. The New York Times calls the show "the best musical of this century." The Washington Post says, "It is the kind of evening that restores your faith in musicals." And Entertainment Weekly says, "Grade A: the funniest musical of all time." Jimmy Fallon of The Tonight Show calls it "Genius. Brilliant. Phenomenal."

The Anchorage Concert Association is the largest arts and entertainment presenter in Alaska. With a mission to inspire and enhance community through the performing arts, the Anchorage Concert Association presents internationally acclaimed artists from the entire spectrum of the performing arts. Learn more at anchorageconcerts.org.